Let's take a little visual tour of the the yard and what we've been trying to do.


This little corner is coming along. We put in the fence. Our neighbors all around us had fence, so we just had to fence along one side which allowed us to splurge and get a white picket fence. It makes me happy. 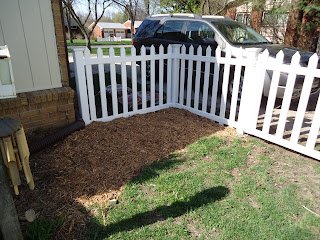 But this corner was awkward, so this weekend I tore out the grass (yes, me! I have the sore pectorals to prove it.) and mulched the corner to tie into the planting bed that was already against the house and deck. We haven't even put the plants in and I already like it better. We will put in some hostas and have our sweet peas climb up the fence. The grass is in bad shape there, but we are tearing it out, so no point in helping it now.

This looks terrible right now, but I promised to show it all. 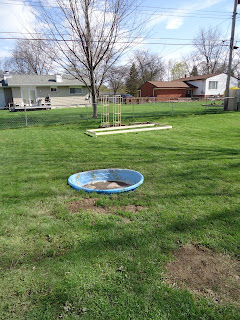 We started digging for our sunken sandbox, but then we have had too much rain to complete the project.

Digging action shot. The boys were uber helpful, you can imagine. ;) 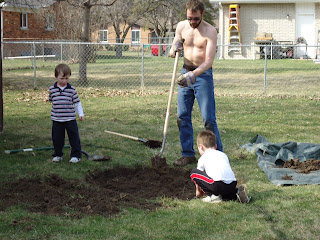 Hopefully by next weekend this will be a nice big sandbox for the boys. I know that the sandbox placement seems a bit random, but I promise there is a method to the madness.

Before I explain, I'll show you what Mateo was occupied with yesterday. 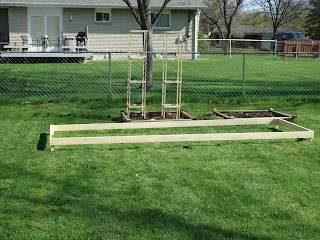 His raised vegetable beds. We put the two small squares in last year. We will add a third square to the left and then he built the long rectangle. He's going to have lots of space. The tall things are bean trellises he made. He still has to tend to the dirt.

Oh, I just realized I should have shown you behind the garage. Ugh! I hate it back there right now so I tend to avoid it. Some space will be cleared to grow pumpkins. And Mateo needs to work on building the compost container. The compost pile has already begun so it looks like a mess. Once the bin is constructed we will be adventuring into vermiculture.  I'm sure I'll have a whole post on that one. (That's composting with the aid of worms, if you didn't know.)
Okay, so here is a shot of the back with notes about what is going to happen. 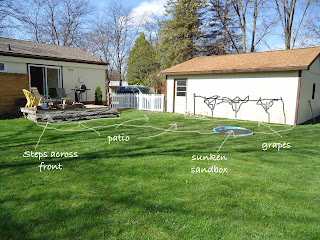 Our yard is large. Much more grass than we need, so we are ripping bunch out and putting in a pea gravel patio. Have you noticed those popping up everywhere nowadays? Remember these bricks I scored? 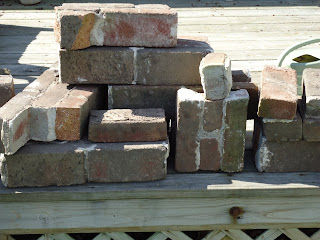 We have more than enough to line the patio so the gravel stays in the patio and not the grass (you know, other than the portion the boys are bound to throw around. sigh.)

So, we are expanding the stairs to run along the front of the deck. There is just a small set of steps on the side. They aren't very convenient.

And you can see that the sandbox is now incorporated into the patio. It will pop out into the grass just a bit for interest. Along the garage wall, Matt plans to grow grapes espalier, which is up against the wall; they be supported by steel cable.
We also have an enclosed fire pit that will sit on the patio part. 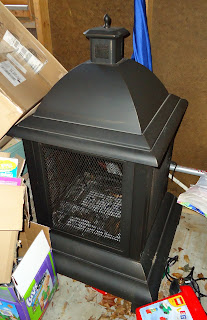 Here it is all sadly smushed in the garage waiting to come back out.

And related, only in that it is a plant, I finally got a bigger plant for the living room. I love having plants in the house! Meet my fern. 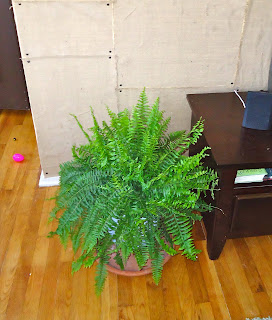 His name is Herbert Nininger and he already has a life of his own.
How about you? Any landscape or gardening plans?
Posted by Jen @ Domesticated Nomad at 12:16 PM