I'll confess, the party wasn't as smooth as I had hoped because it RAINED! I was planning the whole time to play games outside and even though I had the "rain plan" in the back of my mind, I never really believed I'd need it.
Mostly it worked inside, but we had to make some adjustments. For simple games we told them that part of Luke's training with Yoda was about balance, so we had different activities. We had small, flat rocks that they had to see who could balance the longest on one foot. 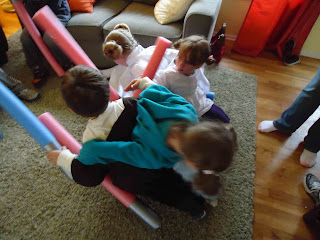 We also had them sit down back to back with a partner, link arms and try to stand up. That was funny to watch! We tried the human knot, where you hold hands with different people and then work as a group to untwist the knot. Um, save that for older kids. It didn't work so well even with adult guidance.
We did "The Trench Run" from A New Hope when Luke has to go down the Deathstar trench and hit the small target. The target? Milk bottles. The ammo? Straws. Yep, it was really the old fashioned drop the straw in a bottle game.

I'm indebted to the Family Fun magazine's April issue (I think it was April, I can't find it now to double check!). We played Asteroid. Played one on one, each person stands inside a hula hoop and they have to toss bean bags into the other person's hoop while defending their own. The person who gets the most bean bags to land and stay in their opponent's hoop wins. This was a lot of fun. I plan to have my kids play this game all summer. 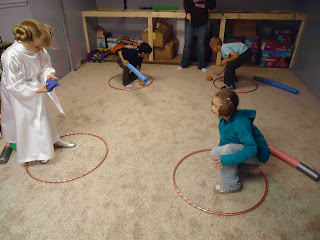 We also played Nerfherding. In Empire Strikes Back, Leia calls Han a scruffy-looking nerfherder. So we blew up a bunch of balloons to be the nerfs and had a large bucket turned on its side to be the pen. We had the kids use their lightsabers to corral as many "nerfs" in the pen as they could in a minute. 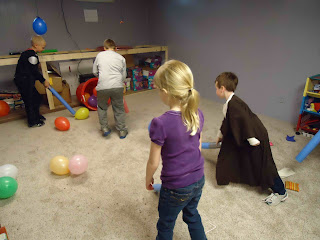 And only the ones that stayed in counted. We had them work in pairs, but you could do this individually too. 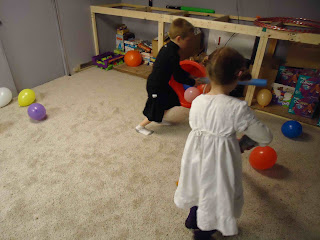 One game I desperately wanted to use but we couldn't because of the rain was another idea I got from the same Family Fun. I think it was called Planets or something. We were going to call it Destroy the Deathstar. Divide the group into two teams. One team has a soccer ball they can run all around and pass it to one another, but it stays on the ground and they can only use their feet. (In my mind, the soccer ball is the Deathstar.) The other team has a softer ball and they can only move their ball around by passing it to one another and they can throw it at the soccer ball to try to strike it. The catch is that when the ball is in your hands, you cannot move your feet. I think this would have been so fun and it would have used up as much time as we wanted.

We were also going to set up an Obstacle Course, but we just pared this down to a relay race instead. Had we been able to use our Destroy the Deathstar game, counting in all the other games, food and opening presents, we were right at two hours. Without the one game we had to kill some time so we put in a Star Wars movie. Oh, and we used a lightsaber battle as the filler while we waited for everyone to arrive.

Gabe wanted to dress up for the party, so we all did. We invited the guests to dress up too and several did. I made Gabe a Obi-Wan costume. 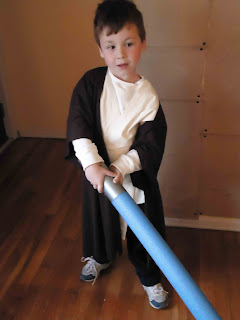 I was going to do a whole tutorial, but honestly, when I sew, I just McGyver things together. There are other, better sewers out there who have tutorials. You could check out Booga-loo for a Jedi robe like what I made.
I used a white shirt and pants (a little baggy, but no one cared), my winter boots and I happened to have a tan vest, which is what Princess Leia wears in Episode 5 at the Battle of Hoth. 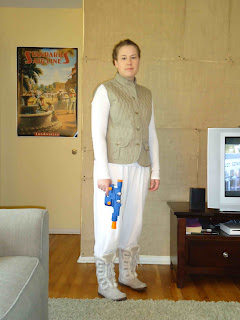 I also made a Yoda robe for Malachi, but he misplaced it before the party. I don't think he would have kept it on.  Oh, well. 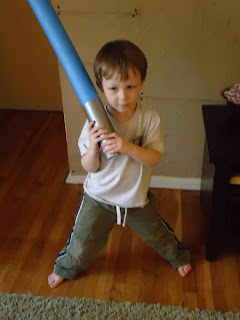 And as he was done at the last minute, we forgot to take a picture of Matt, but his was super simple. He was a Republic Officer. He wore dark gray slacks and shirt and made his rank insignia out of duct tape and drew one the bars with marker and just stuck it on his shirt. 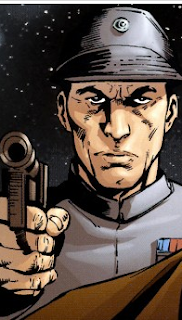