Well, in this post I talked about how this area was just a pass-by of a space, 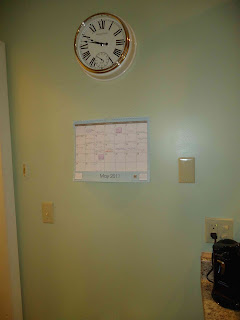 but I wanted to spruce a bit. Spruce is a fun word to say. Spruce.


Anyway. I wanted to address the recycling. We have a detached garage. Also our community collects the recycling once a month and therefore, supplied us with a gigantor 96-gallon bin. It's great, but between the size and the detached garage, I can't have it anywhere near the kitchen. We also have to do can and bottle deposits here, so I have a second trash can in the kitchen to collect those, so no real space left for a small bin in the kitchen.


I am all about recycling, but the truth is, it means you have to keep trash around your house longer. Stuff kept piling up on the counters until we remembered to cart it outside and it was driving me nuts. I want to save the planet, but I also wanted a little bit of convenience too!

So, I decided I needed a shelf. We had this board that was salvaged from a former rental. 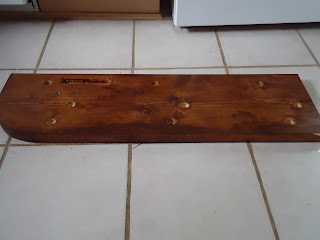 We asked the landlord what it was and he told us it was "just junk." We could have it if we wanted.


There is an argument to made that it was indeed "just junk" but there was something about it. So we kept it.


We had to trim it a bit to make it fit. And I gave it good scrub with some Murphey's.
We bought the brackets at Home Depot for $10. 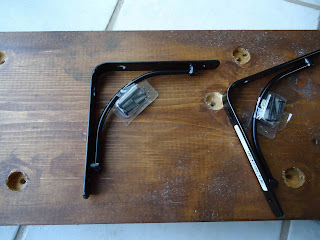 Originally I wanted wood or something chunkier, but I couldn't find it and I didn't want to go to a billion stores looking. I'm a terrible shopper. But these worked out. I like the contrast of the modern metal with the aged, beat up wood. And having smaller brackets works better in the small space.


Now, we can stack the stuff up off to the side and keep the counters uncluttered. 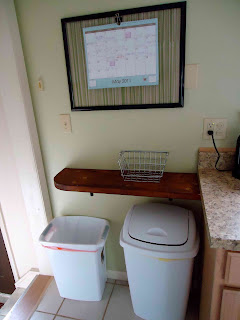 I only had a little wire basket. I would like to find a bigger one, but I think it will help corral the recyables. 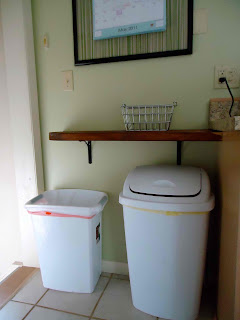 I'm not over the moon on this one, but I think it's going to be so useful. I don't know. What do you think?