Busy as a bee

Busy, actually. As a bee. Bee-like.
Name that show! Two hints: it's not on anymore; Cordelia said it.


Any-who. That's how I have been lately. Bee-like. I have so many things in the works, but I'll try to focus on one at a time for y'all. (Totally not from Texas or anywhere south, but I like y'all. Just saying.)
Do I seem to lack focus already? Yeah.


It's March 28th. For real. I had to check because even though I shouldn't, I STILL have snow on the ground! (We aren't from here, but the locals assure us this is unusual; I hope so.) It's supposedly Spring Break. I only know this because Big Man is home from school, currently screeching like a howler monkey. Why? Because he can. I certainly don't know it by the weather, but Mateo has faith spring is truly coming and coming to stay.
He is getting ready to garden. True story: I killed a cactus. I do not have a green thumb. But Mateo loves his garden. He's mostly all about growing herbs and fruits and vegetables, but he promised some decorative plants this year as well. So, he needed to get his seeds started because he believes he will be able to get stuff in the ground on time in April and May. The man has more faith than I do. Snow! We still have snow!
This is how all my window ledges look. 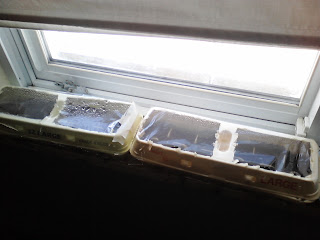 Mateo has been saving egg cartons all winter so that he could use them to start seeds. He took it one step further and cut the tops and attached plastic wrap so he has mini greenhouses. How's that for recycling? 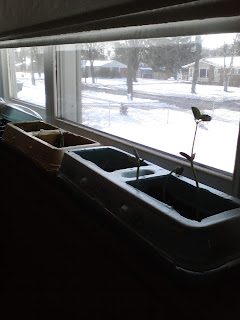 Every ledge. He's running out of places. 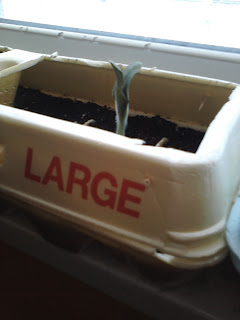 So he decided to use a 30-egg carton, but for that he needed to devise a new way to make it into a greenhouse. Did that deter him? Oh, no. Enter scrap wood and more plastic wrap. And voila! another greenhouse on the cheap. 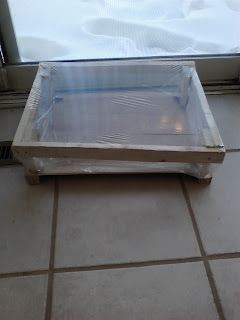 He started an orange tree this winter in an old margarine container and decided to greenhouse it by placing an old peanut butter jar on top. 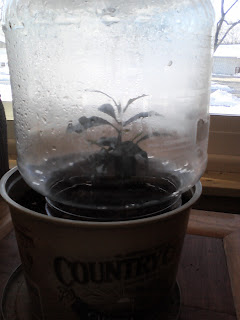 It's thriving, like a mini Florida in a jar. He was eating a orange from the store that had a seed and said, "I wonder if I can grow this?" That's how we start lots of things around here. It's genetic. He gets it from his grandpa. I think it's cute.
I have no idea what all we are growing this year. I've lost track. I know there will be tomatoes, jalapenos, onion and cilantro (because then I only need to buy a lime to make my Pico de Gallo). There will also be basil, oregano, parsley, sage, rosemary and thyme (you know, so we can sing Simon and Garfunkle). There will be squash, pumpkins, watermelon, canteloupe, strawberries, bell peppers, beans, and I don't know what else.
I don't garden much, but I love having the fresh produce to cook with...that's my domain. :)