Blast from my past

I was bored last night and found this buried under books on my nightstand. 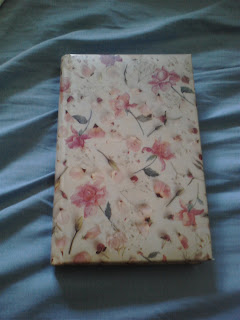 It was a blank journal/book I was given many years ago. I have since filled it with decorating and craft ideas. I started this when I lived in a teeny tiny Boston apartment that barely fit furniture, let alone my big decorating dreams. We did have a great landlord who let us paint (as long as it was neutral) and otherwise enjoy things, but you can't do much that is permanent with a rental.
Ooh, one good idea (and this was pre-digital camera days, so I'd really have to hunt down a photo) was for our non-functioning fireplace. This thing took up a third of our tiny living room and it didn't work so it was an eyesore. So, we took the door off and put a fish tank inside. We used some dense foam to raise it up so the bottom of the tank was even with the bottom of the door opening. It was pretty awesome.
Anyways. Back to the book. It is full of everything I've ever liked but either couldn't do at the time or just didn't know if I could ever use the idea but liked it. I wrote and sketched. 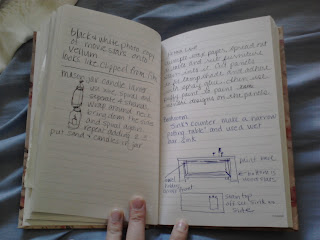 Look at that! Mason jar chandelier years before they became all the rage. If only I'd capitalized on that... :)
I also cut things out of magazines and just taped them into the book. I still have never organized my leftover, touch up paint like that, but it's a good idea. 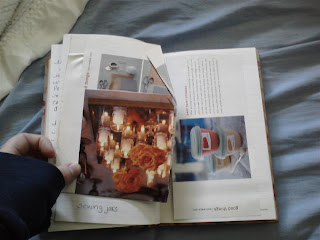 My design taste has changed over the years -- I was once into the whole shabby chic mix of florals and stripes. I feel slightly shamed for having jumped on that bandwagon. ;) But there are some good ideas in there. Some great inspiration even if I wouldn't do it exactly like what's in the book. And it is kind of fun to look back on how I have changed over time. Kind of like going back through an old diary (and just as potentially embarrassing!).
Posted by Jen @ Domesticated Nomad at 2:26 PM