Don't Do What I Do

Be inspired by my idea, not my method.

I don't like coffee tables. I love that we can play on the floor with the kids and we are inherently cluttery people, therefore a coffee table would just be messy and in the way.

Instead, I wanted a sofa table, but to make it look right in the living room, it needed to fit with Karl's length (100+ inches) and be only six inches wide. So we were totally in DIY territory.

Oh, the six inch wide thing. That was mostly because it would line the arm of the couch up with the the line of the window frame. A small detail that most people didn't notice, but does make the room feel better when it's lined up.

So, we decided to make it out of a 1 x 8 that was ripped down to 1 x 6 (because lumber doesn't come in that dimension) and just finish the top and outside legs. The center needed legs for support, but it would be sandwiched between the couch and wall and never be seen.

So, here's the general appearance. 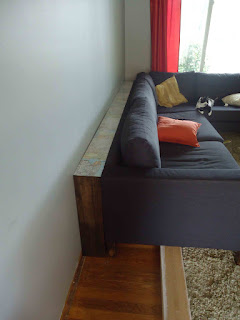 I stained and waxed the outside legs.

For the top, I decided to cover it with maps. I love maps. One car trips, when I'm bored, I just pull out the atlas and study maps, sometimes of places we are not even going.

First I used the whole glue/water mixture, and it didn't work at all. It wrinkled the maps and then they peeled off. Strike one.

Bought a new atlas. Realized spray glue would work better. And it did. They stuck with no wrinkles. 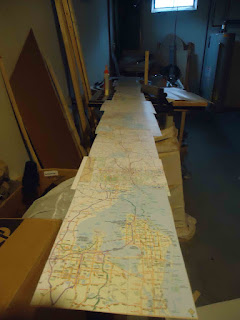 Then, to deal with the excess, I used and X-acto knife and trimmed the maps even with the edge of the board. Strike two. 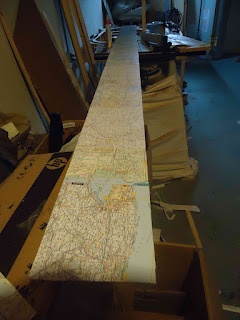 Seemed fine, but when I sprayed the sealer on, assuming I could seal the edges. But no. The paper again began to peel. Grr.

So, I used a paintbrush and wood glue and reattached the paper, and it held, but sorted of wrinkled a little bit. I sealed again for good measure.

Mateo assembled it all and got it in place.

It works great and the maps are awesome, but they have begun to peel in a few spots. Strike three.

So, if I were starting again. I would have left the excess maps and folded them around the edges and stapled them. But for me it's too late. Seriously, don't do what I did. 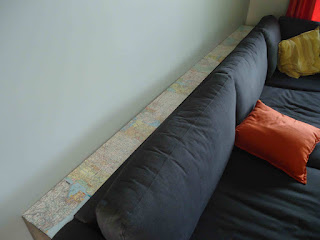 However, the six inch wide table is perfect for the space. It's just wide enough to set down a drink, and for a couple of small lamps. And here is what I mean about lining things up with the window. 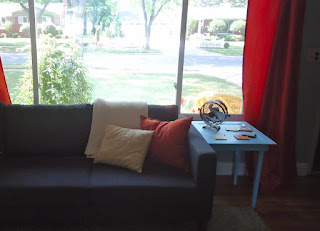 See how the window panel lines up with arm of the couch? Before things felt slightly off, and now it feels balanced.

Most of the time people will never notice these little details, but they are the ones that make a space feel polished and planned.
Posted by Jen @ Domesticated Nomad at 11:18 AM