In the words of Adam Savage...

...failure is always an option.
We have these end tables: 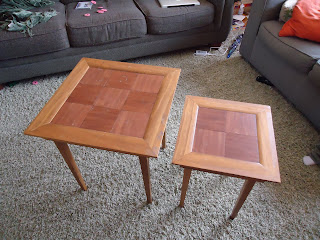 Matt made them many years ago back when we had crazy furniture choices. The TV stand was the lighter color and the bookcases we had were the reddish color. These tables tied it together. At least that's what we told ourselves.
They were nice, but they have been battered over the years. (They look nicer in the picture than in real life.) The furniture choices I've been making have been slowly guiding us towards darker wood with clean lines. So, I thought, why don't I sand these tables down and stain them darker?
So, I debated and debated. I wanted them dark, but stain is translucent, right? So, I thought the color of the current stain would affect the outcome. Heh. Heh. So I thought!
I came home with the new color Classic Black from Miniwax. And to be cheap I bought the 1 step stain and polyurethane in one. Big mistake. Huge. I have to go shopping now. (Sorry, channeling Pretty Woman there.)
I should have bought the darkest brown, but it didn't seem right (dark enough). I should not have bought the 1-step, but it seemed like a time and money saver. Classic Black is not translucent. It does not let any color or wood grain show through! You might as well buy black paint. Also, the polyurethane part was super uneven.
Exhibit A: 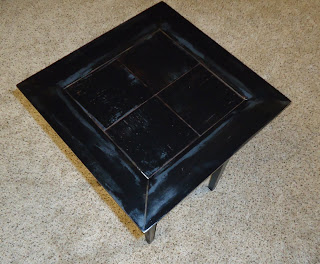 Total failure. I had to sand again. My sander and I got to know each other very well. Say hello to Hermes. 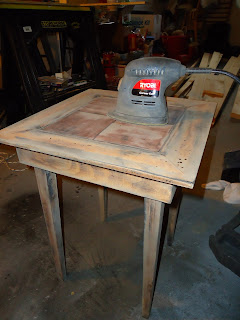 Why Hermes? Well, he helps me send a message to that table.
Lots and lots of sanding later. Hermes and I were exhausted, we had most of the black off. Though is stayed in some grooves and imperfections. Clearly this was going to be a "distressed" table no matter what.
I bought a stain called Jacobean, which was probably the right choice all along and re-stained the table. It is not as dark as I was going for. Some of the wood just did not accept the stain the way I had hoped.
Here it is now, I haven't poly'ed it yet. 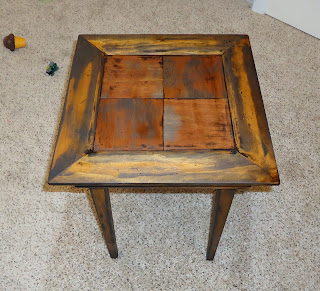 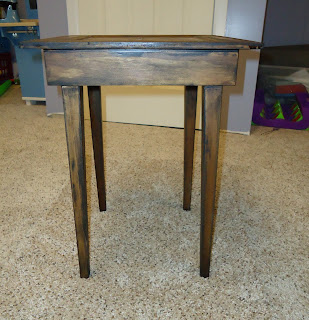 I don't love it. I am thinking about getting some wax paste and just playing around to see what happens. I've never used it before, but at this point we've already seen the worst so I might as well mess with it more. I'll keep you posted with what happens next.

[Update: my free sample from Valspar is on its way. Sonic Sky. I'm going out on a limb, but it will be fun.]