I have a little pillow

I want new pillows to freshen up my living room. I've haven't found all the fabric I really want yet.
Here's what I have at the moment. I still love the colors, and in fact, my curtains are orange, so I will keep the theme, but add some yellow, maybe a little sky blue and ditch the brown. 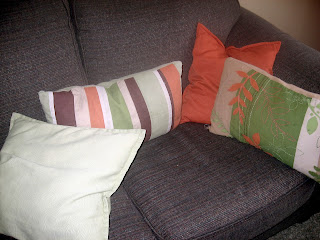 The whole base of my room is pretty neutral, so I don't need neutral colors in my pillows. I haven't had a lot of luck finding anything I like though.
A few weeks ago I did find this placemat at Target. It was the last one. (How do you stock so there is only one placemat left? Or, conversely, who bought an odd number? But I digress.) 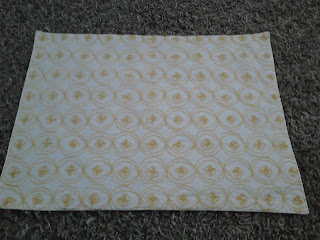 Honestly, I was torn. I loved the look, but I have two boys who will turn this into some kind of weapon or shield and I wasn't sure it would hold up. Here's a close up: 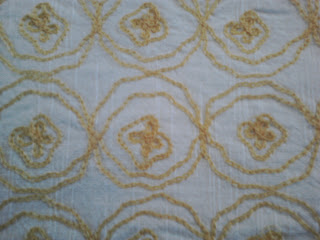 I don't have a "hands off" living space. If it's out, it has to stand up to the boys. Period. It's the only way I'd be able to maintain sanity. And if you only have girls, you can't fully appreciate this issue. Boys in combo are whole different beast.
Where was I? Oh, yes. Pillows. I decided for $2, and a little work, it was worth the risk that it may be destroyed in less than a month. I like to live on the edge.


So, first I had to rip out the seam on one short side. 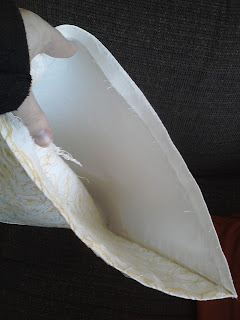 Once I opened it up, I now have the material for the front and back already. (If I wanted a different back, I would have just ripped the seams all the way around.)


My old pillow was almost the right size, so I unzipped it from it's old cover and shoved it in the new placemat-turned-pillow fabric. 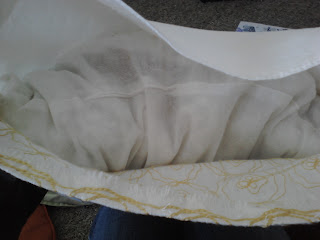 Now, my pillow was not quite as long, but it was also a little wide. But that's okay. The pillow was getting flat, so by stuffing it in a slightly smaller sleeve of fabric, it makes the pillow firmer without needed to open the pillow form and restuff. Does that make sense? 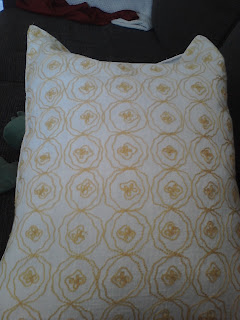 I folded down the little bit of excess (I could have cut it, but there wasn't that much so I didn't bother), pinned it, and sewed it with a whip stitch. Well, actually, I went and discovered I had no white thread. Who runs out of white thread?! Apparently me. So, I had to go to the store and then sew it up. 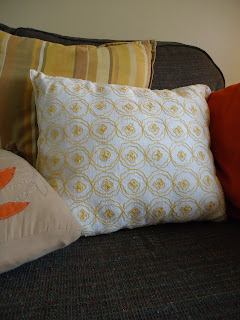 I will look lovely for however long it lasts.(That yellow stripped pillow was in another room, I just moved it to the living room.)

Linking to:
Mad In Crafts