Before and After: Artspace 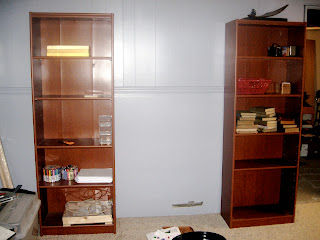 So, this picture is just at the beginning of trying to organize the mess. Mateo helped position and secure the bookcases and I began to go through my two big Rubbermaid-type totes that I had crammed most of my art supplies into.
Enjoy this shot of the mess: 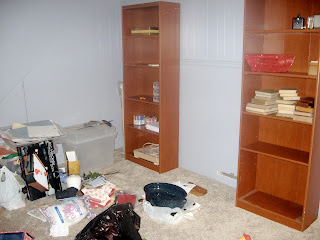 I also have lots of canvases, portfolios, large sketchbooks, old drawings and things of that nature that needed a home. They have not been lovingly cared for all these years. They've been shoved under beds, jammed in closets, and enough was enough. They may not be Picassos, but they deserved better treatment.

Solution: large table with storage underneath.

We used a bi-fold closet door that we found on the street. Mateo cut it in half width-wise, and the halves became the top and bottom of the piece. He built a frame out of 2 x 2's and used luan (a thin plywood type product, other accepted spelling luon) to make the sides. We had to have our table raised to clear the vent. 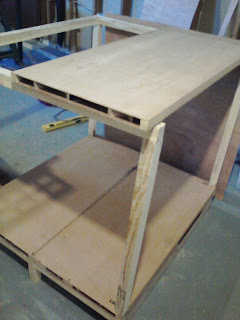 Mateo placed duct work inside and remember to leave an opening in the front so we still have heat in that part of the room. Yay! 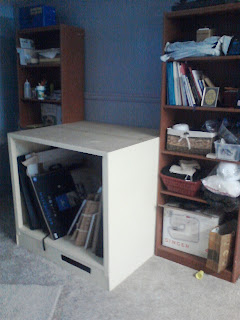 I painted it a creamy yellow because I happened to have some left (free is always good!) and I had intended to paint the top, but I changed my mind and will stain it. To cover the crease made by the doors, Matt is adding a piece of luan. It's thin, so it won't add any more height and it has a nice wood grain so it will look good stained. Bonus: the darker stain color will hide more marks and spills than the paint. We will seal it of course.


We never added the vertical dividers in the bottom. Read this post to know more about that. And this post too. But, it works anyway. It still gives all those large paper and canvas items a place to live. 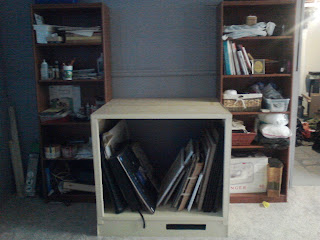 The height is great. I can stand and work (it's a little higher than standard counter height) which I do a lot or I can use a high bar stool. The organization on the shelves could use some perfecting (i.e., cool boxes and containers) but it is so much better than Rubbermaid crates! Now I can see what I have so I don't go wasting money on more of something I already had. Awesome.


You may not have a bunch of art supplies, but this type of space could be useful to those who like to scrapbook, build models, or even sew. (I have my sewing machine down in the bottom, ready to set up in a flash.)


Thus endeth the before and after of my complete-ish first blog project. Up for February: fabric time!

Linking up to:
http://thriftydecorchick.com/
http://www.bluecricketdesign.net/
http://www.elements-interiors.net/
Posted by Jen @ Domesticated Nomad at 3:10 PM