Ode to a Trash Can

Our new addition: a trash can. 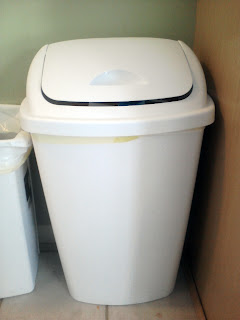 Have you recently shopped for a trash can? It's ridiculous. I don't have a "before," but as it happens with a receptacle into which trash is thrown, it got kind of gross and then the lid cracked. It was exactly like the new one except it was beige.

Why beige? Because it was cheap and the right size. I really didn't want a beige one again though. At the time, it fit in a closet/pantry so it wasn't seen, but in this house it has to sit out. We went to four stores. Four! Ridiculous!
First store had the exact same thing we had before, or round ones or black. I did not want black and I did not want round. Most trash is not round and the lids are smaller. The next store had even fewer choices and everything was more expensive than the first store. The third store was just a whim. I knew the prices wouldn't be great, but I thought the selection would be better. Wrong. One cheap one that was metallic beige. Seriously. No thank you. Or stainless steel. Now, I don't have stainless appliances. I don't want my trash can to look fancier than my appliances. But I looked at the price -- $70. What? That can't be right. Oh, yes, it was. Why would I spend that much money on a place to stick garbage?! But somebody must be buying them.

Finally, when I wasn't even looking I saw our trash can. Same thing as before which was working for us and in white. Why white? Well, we have bottle and can deposits to deal with, so that "recycling" can is already white and why not have some continuity. 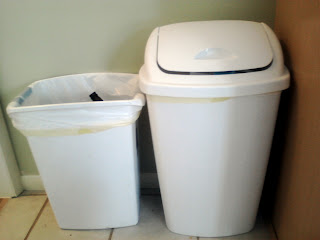 If you don't have deposits, I'll just tell you it's a pain! It's such a waste of effort since we already have a good regular recycling program. You cannot crush or in anyway make it more convenient for yourself because the machine has to read the barcode. You have to go someplace that takes them and then feed them into the machine one at a time. You get a receipt and then go stand in line to get your money back. Then, because you are already at a grocery or box store, you use the refunded money to go buy more beer
and start the cycle again. It's how we roll.
After that all that shopping for something ridiculously simple, I felt like echoing Clark Griswold, "Hallelujah! Holy $#%! Where's the Tylenol?" But at least it's done.
Posted by Jen @ Domesticated Nomad at 3:00 PM

Email ThisBlogThis!Share to TwitterShare to FacebookShare to Pinterest
Labels: shopping