Raise your hand if you live in a house that looks like the glossy magazine spreads. Anyone? I know a couple people. My house doesn't look that way. It never will, I say as I look across the living room floor at the K'nex that still haven't been picked up. Could you imagine even seeing K'nex in Martha Stewart's house? 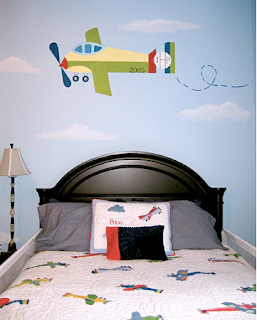 Not my house. Visit Martha's site for more.


If something doesn't match, I expect Martha must banish it. A blog I like only allowed a rocking horse in their daughter's room because it matched the decor. This just cracks me up. I wonder how long that will last. Toys have an annoying habit of coming in all sorts of colors, shapes, and noises. 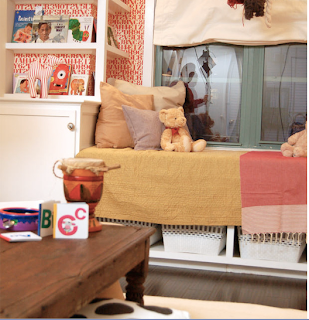 Still not mine. I love Genevieve Gorder, but this room was crazy work considering in a couple years the kid won't want that letter wall paper on the bookcases.


So, as I mentioned before, I long ago abandoned the dream theme kids rooms. I purposely go with a anything-goes-hodgepodge. Then nothing sticks out looking all funny like the crazy uncle of the room.
Munchkin Uno wanted to feel the love of a blog posting on his room, so I said, "Clean it up then." And he did. 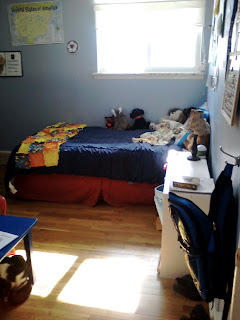 He wanted blue walls and the house already had a blue room, so voila! This kiddo is my creative one. He long ago inspired me to just start putting his mountains of paintings and other art work all over his walls. 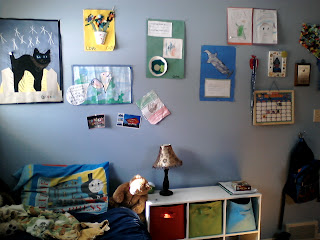 Now that he is a little older he has wanted to put things of interest up, like a Star Wars poster. But I think it's his choice. I will say that lamp is a crazy uncle though. He needed one and it was on hand. I keep meaning to replace that, but he doesn't really care. 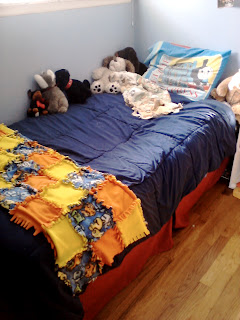 So, although he loves blue and wanted blue bedding, I tossed in some red to break it up.

I also purposely picked all different colors of boxes to fit in the Closet Maid cubbies. This is good for two reasons: 1. each type of toy has its own color for easier clean up time. For example, K'nex go in the red one. 2. They get a bit battered, so when I need to replace one, I don't have to worry about find the exact same color because they do change these things.

Sorry, I should have zeroed in on the cubbies. I only realized that I didn't until I started posting and he's in bed. It would be quite rude to go and flip on his light for picture now. 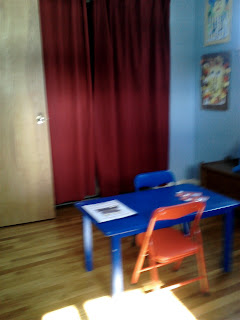 Sorry, bad picture. Still taking them with my cell phone right now. The red curtains are actually covering his mirrored closet doors. He did not like the way the light reflected at night; it scared him. The fastest cheapest solution was to put curtains over them. It adds a fun splash of color too. His little table has been great though. He has had it for over 3 years and still has use for it. 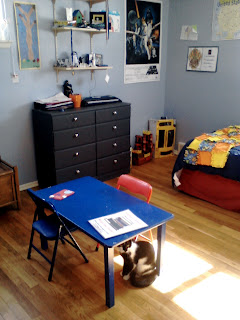 His toy box and dresser are hand-me-downs. We talk occasionally about changing the colors, but it's never a priority. Over time his room has become an even bigger hodgepodge. I imagine as he makes more of his own choices (that and he cannot keep it clean!) it will  look less and less like something Martha would condone. But I'm good with that. No invites for magazine spreads coming my way. How about you? ;)
Posted by Jen @ Domesticated Nomad at 9:43 PM