We've been moving along on projects, but lots of things are still unfinished. I have decorating ADD. I start one thing, hit a glitch or get tired or just feel the need to squeeze something else in and start another thing.
You may recall the basement stairs project. If not, check out this post, and a few others under the stairs label. We've slowly made progress (but truthfully we've mostly abandoned it for outdoors projects right now) but there was more to the demo than we thought. 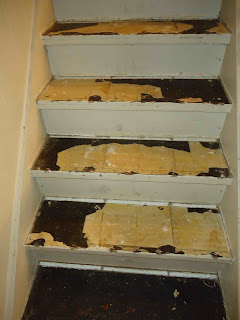 Three layers of stick on tile plus a layer of plywood and some random screws that may have held carpet tack strips. No wonder I always thought the cadence was off! 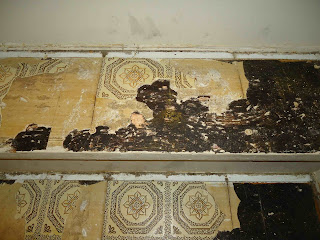 Lovely, isn't it? Someday I'll have a big reveal. Someday...
We've been uber busy on the outside of the house. When we bought it, it looked like this: 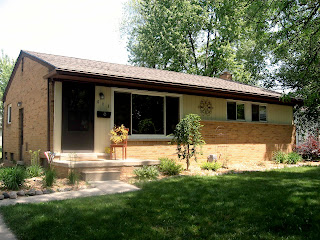 But some of that cuteness went away, and upon closer inspection some things were annoying. Let's make a list! 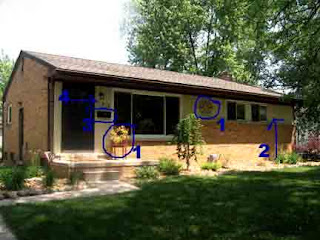 1. Cute decorations and chair went away with the old owner. :( Kind of hoped they'd leave it, but I didn't expect it.
2. Color although nice and cheerful in the summer, was really washed out and dreary all winter and most of the fall and spring as well, so you know, most of the year.
3. The postal service is making new owners move the mailbox from the house. I understand, but find it annoying. (I'll show you that solution later.)
4. The house numbers are annoyingly small and the 0 was put on upside down.
So some changes have occurred and more are coming. 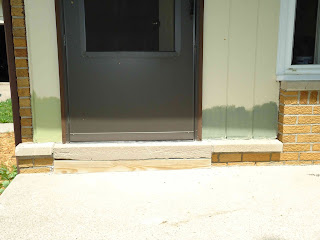 But I'm not going to show you just yet! I'm such a tease.
Posted by Jen @ Domesticated Nomad at 11:09 AM