Messy. Messy. Messy.
First, the begged to share a room. Weird, I know. Don't most kids beg for their own rooms?

So I said okay. We bought some bunk beds and put them together. But the mess just multiplied. The nice open floor space for playing just became a pile of dirty clothes and abandoned toys. 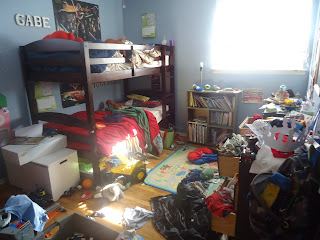 If they aren't going to use the space for play, they don't need it at all. So, let's take a little tour. 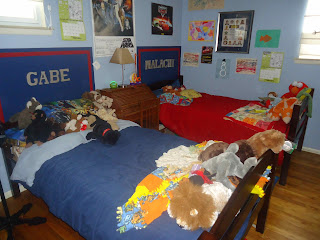 Not only did we un-bunk the beds, but I painted a headboard on the wall with navy paint and a red stripe. 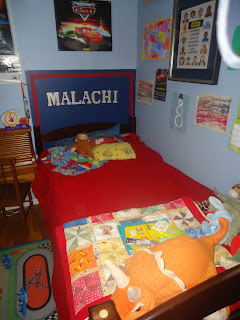 Their names are wood letters that were spray painted silver. (They helped hang them, so don't judge the wonky placement.) Gabe likes blue and Malachi likes red, so it's been easy to work with. 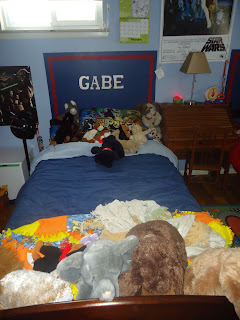 They have a cute little roll top desk that we snagged at a church rummage sale. It makes a great spot for a lamp and clocks.

Opposite the beds is the wall of storage. 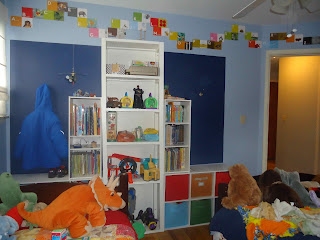 Boys' toys are either tiny pieces or huge things that don't fit anywhere. For the small stuff, on each side, the bottom is a 6-cubbie storage unit from ClosetMaid. 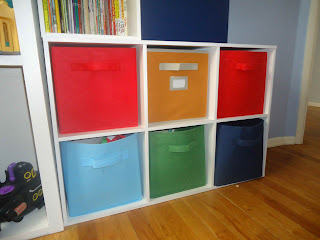 We have randomly selected colors over time because the companies change the colors all the time. This way when I need to replace one, I don't have to worry about matching what we already have.

The middle shelving unit was built by Matt.It has a twist due to a warped board that he didn't notice until it was almost done.

He hoped he could just anchor it to the wall, but it didn't work. So, this is temporary. He's building a better one. 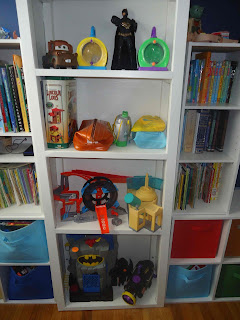 But it is easy for the boys to see and select a bigger toy and slide it back on the shelf when done.

The 3-cubbie units on either side of the shelves are also ClosetMaid, but these have adjustable shelves. 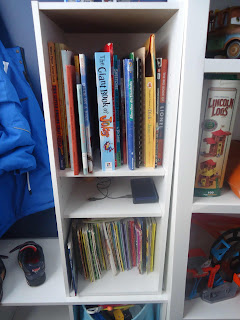 Great for the books, but we also drilled a hole in the backing to fit the cords for their DS chargers. A little container holds the games and they can store and charge their DSs now. 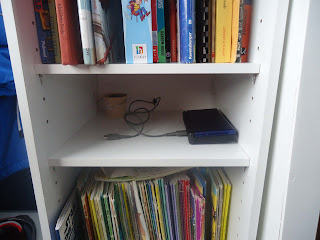 I painted the wall behind the storage navy to tie it together and tie into the hanging space. We added a double hook to each side so the boys can hang their coats and backpacks. 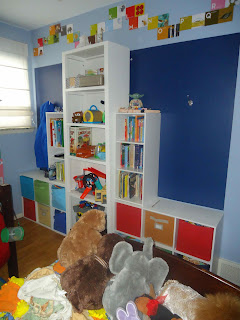 We put their dressers in the closet. They don't have much hanging stuff anyway. 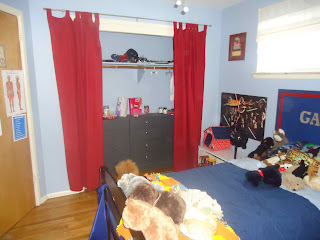 And yes, you can open all the drawers. The curtain add a pop of red for Malachi. 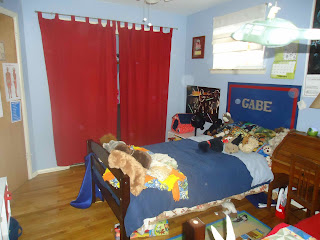 The walls are just a hodgepodge of favorite posters and their own art work. We left some space so we can add more. 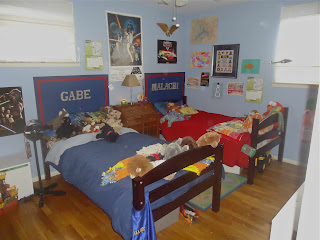 I think the Charlie Harper alphabet above the storage is my favorite.

Malachi has had it since he was three and I was glad he still loves it because I do too. They are actually flash cards which I just hot glued to the wall.

So far they love it and want to keep it clean. I don't expect that to last forever, but I hope this arrangement keeps it all in check better.

Almost forgot. We have storage bins that slide under the beds which are storing things like Legos and art supplies, so those are handy too. Un-bunking the beds actually made more room for storing things!