Us vs. the Leaves

If it were up to Matt, he'd never remove the leaves. He doesn't think he needs to tamper with nature or God. I, however, eventually get sick of looking at them.

We resisted a leaf blower for a long time. I have issues with gassing up lawn tools to take care of nature. Polluting to make a pretty lawn just kind of irks me. But we finally bought an electric leaf blower. Partly because we can't rake the new patio, and we have a long driveway and I hate the sound of rakes scraping concrete. Worse than fingernails on a chalkboard to me. (Yes, we sweep it, but that takes forever, and sometimes you just quickly rake the edges. You know what I mean.) 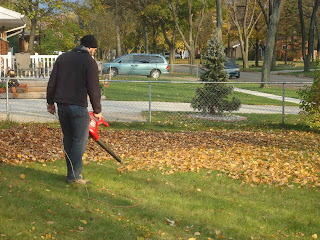 Matt and I are in disagreement though. I think after using it, that a leaf blower only makes you feel like it's less work, but that it doesn't actually save you anything at all. Matt says, not so! It really is less labor (though he admits probably not less time).

He's wrong of course. :) But what do you think? For me, I can rake faster than I blow the leaves because when you blow them you have to go back and forth and there is not nearly as much control. I also think the blower is heavy and so my back hurt more when I was done. Matt has more upper body strength so he thought it was less achy to use the blower.
The part I like though is the vacuum attachment. You can suck up the leaves and it chops them into a bag. This at first seems like it would take longer, but I raked and put leaves in the wheelbarrow, wheeled it to where they needed to go, dumped it, came back and did this five more times. With the vacuum, it was two trips. Plus the vacuum works better in planting beds and on our patio.

But I have to say, walking around vacuuming your yard just feels weird!
Posted by Jen @ Domesticated Nomad at 10:51 AM