Design on No Dime

Our bathroom needs help. I want to take the tile out, but it's just not in the cards right now.

I talked about the why's and how's of the dandelion shower curtain in this post. 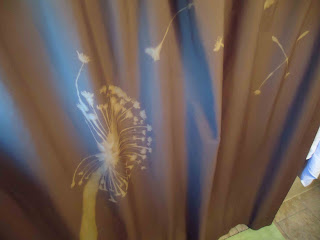 I wasn't thrilled because it was just too dark for the space. Gabe ran in and exclaimed, "Cool, mom! You made it look smaller!" Uh, yeah. That's exactly what I was going for. :/ 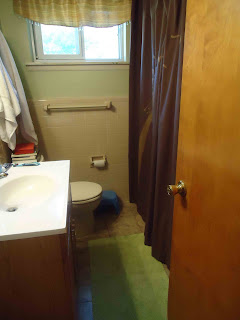 Then I wanted to steal the bathroom valence for the kitchen, so I replaced it with the one from the kitchen which I knew was too big, but I just went with it anyway. 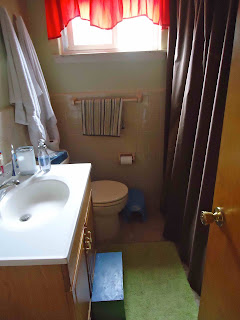 It was starting to look like I should just throw up a disco ball and call it the seventies. It was getting bad. I cringed when people asked to use the bathroom because I didn't want them to see it!

But, with other things going on, I did not want to spend any money on it right now. So, I shopped my house.

I found green curtains I no longer use, and discovered that it takes two curtain panels to span the bathtub. I just put the tabs through the curtain rings and overlapped the panels in the middle. 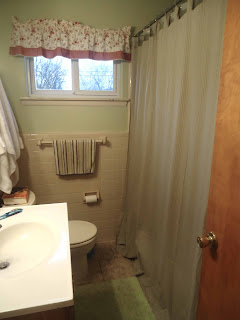 I found the flower valence as well. I was surprised I still had it because it's just not my style anymore, but for the purposes of this bathroom, I was going with it because it fit the window better. 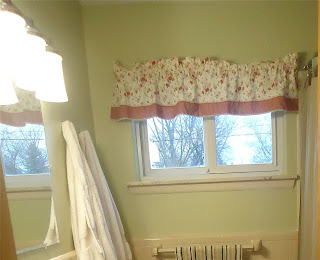 I didn't have anything that could stand in as a bath mat, so I tried to bleach the lime green one. But, alas, being made of synthetics, it didn't work. So, it doesn't really match, but still. It looks better than before.

And I spent zero dollars!

This post may be linked at the following parties (for their Blog Buttons see my Link Love page): (M) C.R.A.F.T., Amaze Me Monday, Sumo's Sweet Stuff,  (T) A Little Birdie Told Me  Stories of A to Z, The Blackberry Vine, How To's Day , Type A, Amaze Me August, , Show Me What Ya Got,  (W) Wow Me,  Blue Cricket Design, What I Whipped Up, Wicked Awesome Wednesday, Sweet Peas & Bumblebees (TH)   Creative Juice, Thrifty 101 , Smilemonsters , Everything But the Kitchen Sink, Shabby Chic Cottage, Thrifty Thursdays, House of Hepworth's,  (F) Fingerprints on the Fridge, Furniture Feature Friday,  Lovely Crafty Weekend , Remodelaholic, For the Kids Fridays, , Craft Goodies, (Sat) Tatertots and Jello , Anything Goes , Funky Junk Interiors (Sun) Creative Blog & Hop, Sundae Scoop, Under the Table and Dreaming
Posted by Jen @ Domesticated Nomad at 8:00 AM

Email ThisBlogThis!Share to TwitterShare to FacebookShare to Pinterest
Labels: bathroom, no money, thrifty