On Cats in Ceilings

Mateo and I debated what we could tackle this weekend, but then the cat decided for us. Yup. The cat. 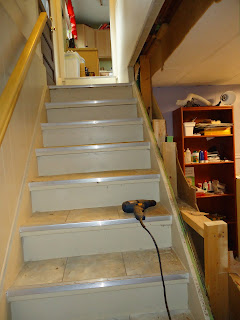 Well, the basement's drop ceiling actually hangs lower than the opening for the stairs. (We looked at raising it, but there isn't enough room due to duct work, in case you are curious.) 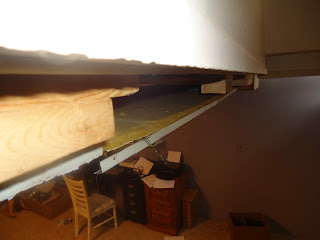 We knew we would close this in, but we were more concerned about finishing the stairs themselves. After trying the brown kraft paper technique from Lovely Crafty Home, I had to admit that for whatever reason, it will not work on these stairs.

Then, one day I couldn't find the cat, but we'd had some tv repairmen in the house, and she always hides when strangers are around. But after they left, I still couldn't find her.

Later, she sauntered around -- sneezing.
Weird noises at night that night.

Next day, the cat disappears again. (And I knew she wasn't getting out; she's a scaredy cat who won't go out.) She's Mateo's cat really. So he goes down the stairs calling her, and suddenly she's at the top of the stairs, but she didn't run up them and a ceiling tile crashes down.

The darn beast was playing IN the ceiling! 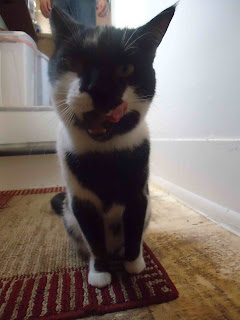 That did it. New plan. Seal the ceiling.

This was a Matt project. He used some leftover lumber to make a box that would match the little bit that already existed. 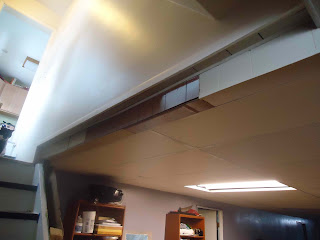 Then he took some scrap paneling and filled in the front so it would have the same matching panel lines. 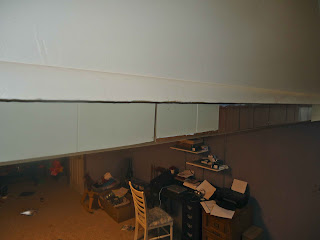 Next up will be priming and painting it all. But Matt had to hammer some nails at weird angles, so he was ready to be done.

At least Tesla can't climb into the ceiling anymore. 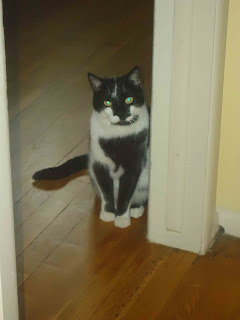 And, yes, she's a bit miffed about the whole thing right now. :)


This post may be linked at the following parties (for their Blog Buttons see my Link Love page): (M) C.R.A.F.T., Amaze Me Monday, Sumo's Sweet Stuff,  (T) A Little Birdie Told Me  Stories of A to Z, The Blackberry Vine, How To's Day , Type A, Amaze Me August, , Show Me What Ya Got,  (W) Wow Me,  Blue Cricket Design, What I Whipped Up, Wicked Awesome Wednesday, Sweet Peas & Bumblebees (TH) The ArtsyGirl Connection,  Creative Juice, Thrifty 101 , Smilemonsters , Everything But the Kitchen Sink, Shabby Chic Cottage, Thrifty Thursdays, House of Hepworth's,  (F) Fingerprints on the Fridge, Furniture Feature Friday,  Lovely Crafty Weekend , Remodelaholic, For the Kids Fridays, , Craft Goodies, (Sat) Tatertots and Jello , Anything Goes , Funky Junk Interiors (Sun) Creative Blog & Hop, Sundae Scoop, Under the Table and Dreaming
Posted by Jen @ Domesticated Nomad at 7:50 AM