Last week we made our piñatas, so now it is time to decorate them. 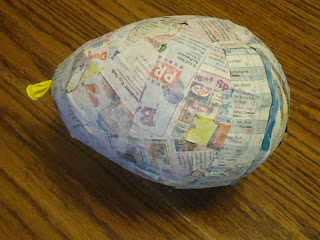 There really are as many options as your imagination can dream up. You can paint it, or add anything type of material. But I am going to focus on a more traditional way of decorating.

You've seen the piñatas decorated with their festive fringe. You can simply cut a strip of tissue paper and then cut fringe and add that to your piñata.

But, I'm going to show you how to make puffier fringe. (My seventh grade Spanish teacher taught me this.)

I like to just keep the tissue paper folded and cut off my strip. You want it to be a couple inches wide. Feel free to unfold the paper to cut if that makes you more comfortable. 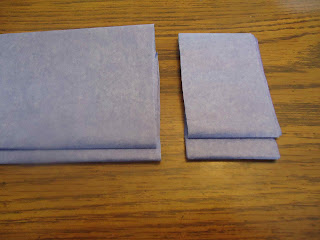 Take a strip and lay it out. Near the edge, down the length of the strip, add a thin bead of glue. 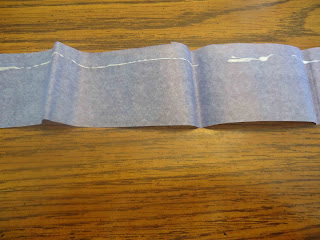 Fold the long edges together and press to seal, BUT do NOT crease. 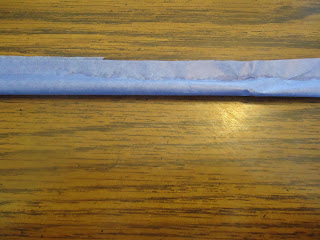 Gabe and Chi helped a little bit with this, but it's not the most exciting part and a little tricky, so I wound up doing most of this part.

Once we had many glued, we cut it into fringe. 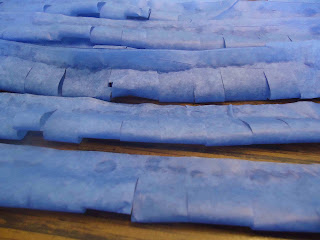 Now, options for add-ons. We use cardstock for these. Ours is going to be a fish, so we needed a tail and fins.

We drew those on cardstock and cut them out. We used glue to adhere them, but added some tape to hold them in place while they dried. 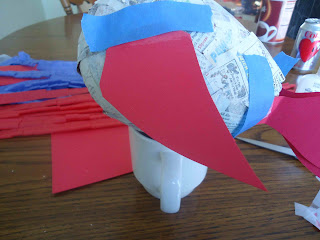 We used the tail to hide the hole, so we made two pieces and glued one to each side of the hole. We then left that alone so it could later be filled.

We started at the tail and put a bead of glue on the piñata, and then glued the fringe around. 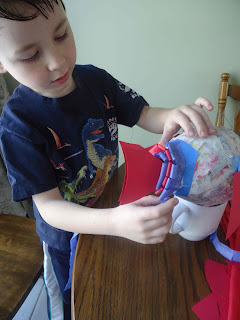 Tear it off if it's too long.

Add the next fringe, changing colors if you chose. 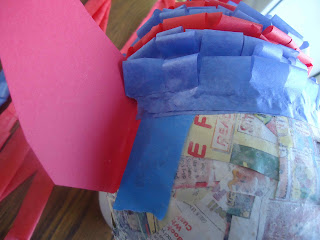 When you reach obstacles, like the fins, you simply glue the fringe between them, tearing off the excess.

So, let's have a little aside about a more traditional kind of piñata, a star.

To make the points of a star, you will need to make cones out of cardstock by rolling them into a cone shape. 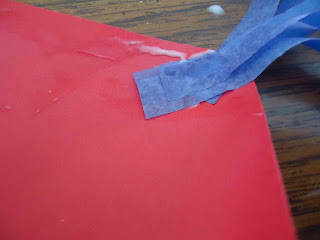 Before, gluing or tape the cone, cut thin strips of tissue paper and glue or tape about five strips to the inside of the point of the cone. 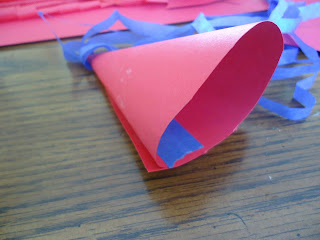 Then role and secure. around the base of the cone, cut fringe and bend the fringe. Tape this fringe to the piñata before you start with the decorative colored fringe. 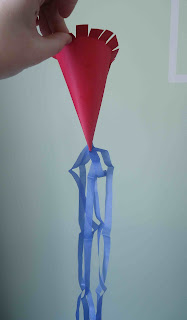 Okay, back to the fish. So you once our piñata was covered, we added googly eyes. 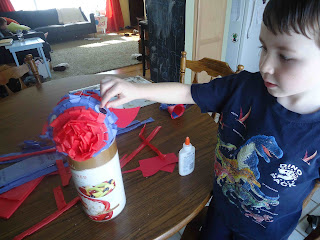 Now, we decided not to fill and break ours. Our fish, now dubbed Clarke, will be staying. If we were filling him, I would gently open the tail pieces, carefully fill the piñata. Place a piece of tape over the opening.

Then we glue the tail pieces together. 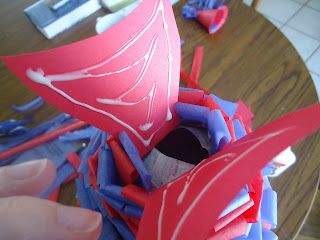 And that's it. We have Clarke our fish now. 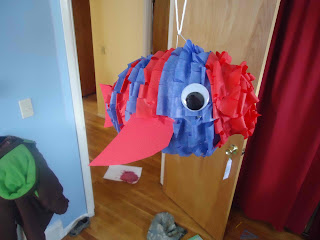 (Just ignore all the mess. We didn't have time to clean; we were making a piñata.)

This post may be linked at the following parties (for their Blog Buttons see my Link Love page): (M) C.R.A.F.T., Amaze Me Monday, Sumo's Sweet Stuff,  (T) A Little Birdie Told Me  Stories of A to Z, The Blackberry Vine, How To's Day , Type A, Amaze Me August, , Show Me What Ya Got,  (W) Wow Me,  Blue Cricket Design, What I Whipped Up, Wicked Awesome Wednesday, Sweet Peas & Bumblebees (TH) The ArtsyGirl Connection,  Creative Juice, Thrifty 101 , Smilemonsters , Everything But the Kitchen Sink, Shabby Chic Cottage, Thrifty Thursdays, House of Hepworth's,  (F) Fingerprints on the Fridge, Furniture Feature Friday,  Lovely Crafty Weekend , Remodelaholic, For the Kids Fridays, , Craft Goodies, (Sat) Tatertots and Jello , Anything Goes , Funky Junk Interiors (Sun) Creative Blog & Hop, Sundae Scoop, Under the Table and Dreaming