My friend, Diana, and her husband, Kent, are embarking on a huge remodel project and we all get to come along for the ride. And even more fun for me, yours truly has gotten a say in what things should look like. (No veto power though. Hmm. I should work on that. I jest!)

So, the project is THE KITCHEN. Huge undertaking. We are talking a whole new floor plan, demo-ing walls, new cabinets, floors, countertops, appliances, paint...
Here's some before action: 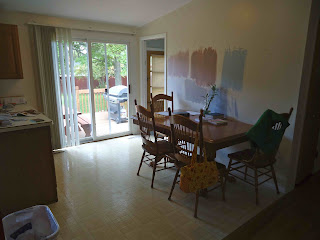 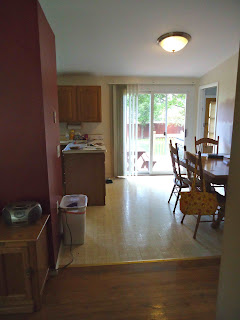 The dining room next to the kitchen. 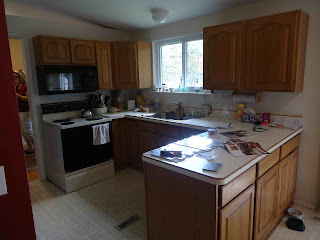 One view of the kitchen. 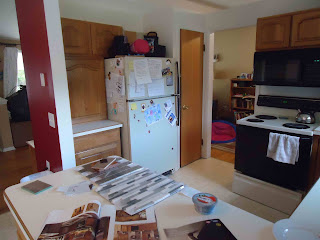 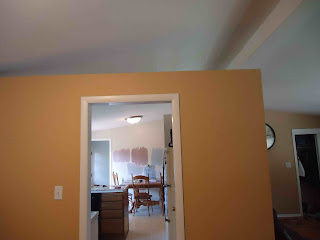 Here is looking in from the formal dining room side, which is not really their formal dining room, but more of an office/mudroom space. You can see the walls don't even reach the vaulted ceiling anyway, so no problems changing them.

Getting ahead of myself. Here's the new plan:


The wall separating the living and dining rooms becomes a half wall. And the layout becomes two L's. The left side extends farther than the original kitchen into the formal dining room, complete with bar to sit at and eat or just annoy the cook.

They decided on their cabinet style 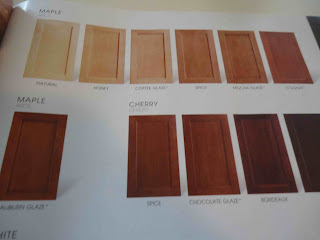 and color and countertops, 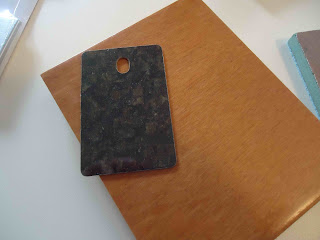 but then I was called in for color opinion (and now I just give my two cents on everything. :) )

"I like white," Diana boldly declared. She wanted to get away from her beige and red

and brighten things up. The day of sorting through paint chips was hilarious. I vetoed white. I know I don't have veto power, but I did it anyway. It's hard to do white right and it actually doesn't always brighten things. We finally get down to gray and blue.

Personally, I avoid blue in the kitchen since it is an appetite suppressant, but to each her own. But then Diana tossed every blue chip out. (And kept picking beige. I had to remind her we were not doing beige anymore per her instructions.)

Strangely enough we settled on purple. I am uber excited about this possibility and after playing around with Sherwin Williams color picker online, Diana got some samples and put them up on the wall. 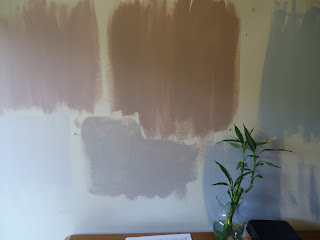 Some were a bit "mauve-ier" in person than online, so we decided against that. Not trying to bring back the '80s. 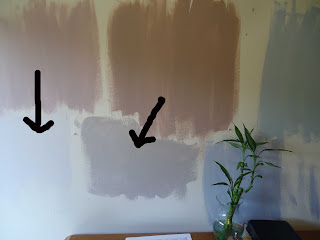 We settled on the kitchen and dining room accent wall being the lavender-gray color in the middle and the rest of the living room being the very light lavender/gray color on the left. I realize it doesn't look like much in the picture, but it's great in person. Just enough color. However, before I managed to post this, Diana picked another bit darker color for the living room and I haven't had a chance to go check it out yet.

Obviously, the paint is not of upmost importance since it will be awhile before they get to that stage in the adventure, but it's nice to know where things are headed.

his post may be linked at the following parties (for their Blog Buttons see my Link Love page): (M) C.R.A.F.T., Amaze Me Monday, Sumo's Sweet Stuff,  (T) A Little Birdie Told Me  Stories of A to Z, The Blackberry Vine, How To's Day , Type A, Amaze Me August, , Show Me What Ya Got,  (W) Wow Me,  Blue Cricket Design, What I Whipped Up, Wicked Awesome Wednesday, Sweet Peas & Bumblebees (TH)   Creative Juice, Thrifty 101 , Smilemonsters , Everything But the Kitchen Sink, Shabby Chic Cottage, Thrifty Thursdays, House of Hepworth's,  (F) Fingerprints on the Fridge, Furniture Feature Friday,  Lovely Crafty Weekend , Remodelaholic, For the Kids Fridays, , Craft Goodies, (Sat) Tatertots and Jello , Anything Goes , Funky Junk Interiors (Sun) Creative Blog & Hop, Sundae Scoop, Under the Table and Dreaming