Gabe turned eight last week, so we had a party. You may know from the past we always invited his whole class, and that is a lot of people. This year we made him chose just a few friends to invite, and that made it easier to have an elaborate mission for them.

But first, invitations. I took manila folders and cut them in half, then I trimmed the open edges to make it folder-like proportions again and just used scissors to cut the tabs that manila folders normally have.

I used the computer to type a little message with party details, inviting the kids to be special agents and come to spy training. I did glue the top of the paper into the mini folder just so it wouldn't get lost, but I added a paper clip because that seemed more office memo-ish. 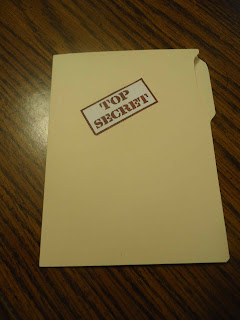 I printed TOP SECRET from the computer and cut and glued them to the outside. And that was all that was.

When the kids arrived, I snapped a picture of them, a head shot, if you will. These were to go into their passports with their aliases. I made up the passports ahead of time and just had to print the pictures and glue them in while Matt began to train them. 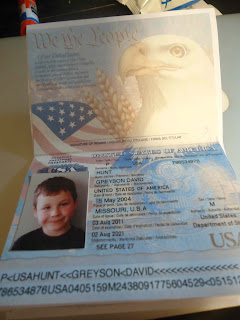 Training included code-breaking. They practiced Morse code and learned about invisible ink. We used baking soda-water, which is base on the pH scale, to make messages. Once dry, they used acid either in the form of grape juice or vinegar to reveal the message. We also showed them some other codes they needed to complete the upcoming mission.

We had a "laser" maze made with string and duct tape. Part of training was to practice going through, and this was probably the part that had them most excited. They all loved it. 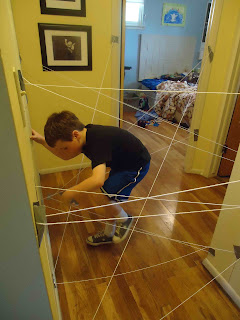 We also had them do target practice with water guns. This was also exciting, but honestly, go with the laser maze if you have to pick one. It was by far the highlight. 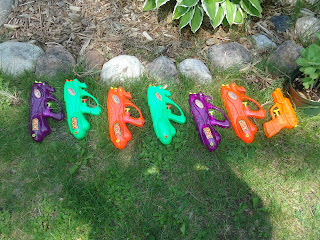 Then they got a message. They were needed for a top secret mission. Former KGB agent Boris Prosorov had stolen nuclear material and was threatening to destroy a city if the UN did not pay him eight billion dollars! Gasp!
[Not that they know what the KGB is, but we went with something "old-school" and not realistic for today's world on purpose.]

We filmed a congratulatory message for the end of the mission. They will run back to back if you watch the video (complete with outtakes.)

Here's how we did the mission:
They had to get to Switzerland, so they grabbed their passports and guns and ran out our side door where Matt loaded them into the "plane" which was just our car with all the seats folded down so it was more like a cargo plane. He got in and put on a "pilot's hat" and rolled them down the driveway (at like 2 mph). Ta-da! They had "flown" to Switzerland. I was waiting to stamp their passports and give them a clue as to where to start. 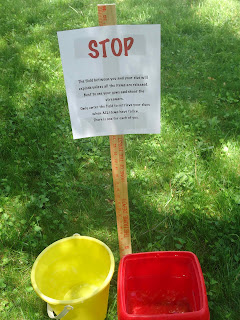 They ran to the side of the house and read a message telling them they had to shoot down all of the clues from behind the line (it was a mine field that would only deactivate once all the clues had been released). 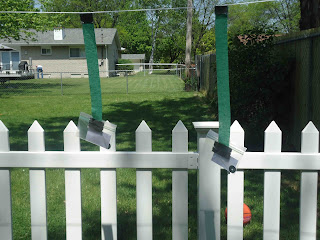 Attached to each streamer was a letter. All the vowels: A, E, I, O, U, and (sometimes) Y. Each letter was a color of the rainbow. There was also the addition of a Morse code message. The vowels were clues they had to save that would become clear later. The Morse code message led them to the next clue. They had to shoot their water guns at the streamers. We weighted the letters a bit, so that when the streamer got wet, it would break and drop the letter. 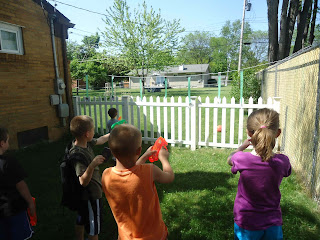 The next location was our mailbox. Inside they found a PVC pipe with what looked like a ribbon of gibberish letters. But when they wrapped the the ribbon around the pipe the letters lined up to make a message which read:
Red is a warning.
Green makes up hop.
Snow does nothing.
And tar makes us stop.
This clue told them what the different "bomb" wires did, so to "diffuse" the "bomb" they had to cut the black. (Red made a buzzer, green sped up the clock and white did nothing.)

To get directions on where to go next, they got a call from Headquarters. (I changed my phone so that calls from home said "Headquarters") This sent them to Geneva, and we had a sign on our fence that said Geneva (Clever, huh?). 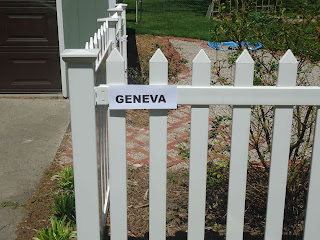 At the fence, I quizzed them on their passports, something easy like their alias's last name or birthplace. I told them, "I hear the Russian cafe is delicious."

So they ran to the deck which was set up with a table and chairs. Matt came out of the house with an apron on and presented them with a menu. The menu had an invisible ink message hidden, and so they had to order the grape juice to reveal the message. 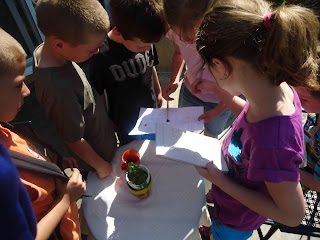 The message said, "Time falls like sand. Connect the dots." They could see bocce balls sitting in the sandbox. They were numbered, so they had to use the rope to play connect the dots, and at the point of the arrow, they dug to find a box with a clue and wire cutters. (This was taken directly from Ruff Ruffman, so Gabe knew it as soon as he saw it.) 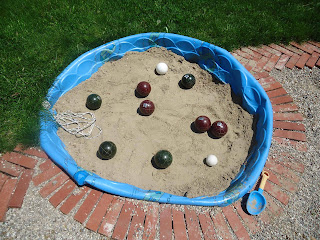 The clue was missing it's vowels, and those spaces were replaced with colored boxes. They figured out the rainbow colored vowels they received before were the key, so they began to fill in the box. 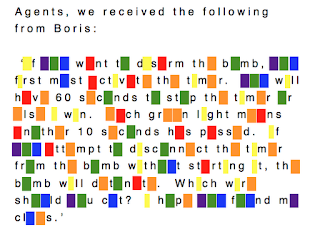 It was message from Boris taunting them about understanding the clues about how to diffuse the bomb.


And there was an address in french. A little jaunt over to the laptop to type it into Google Translator and they knew that they had to go to the Alley beside the Garage. 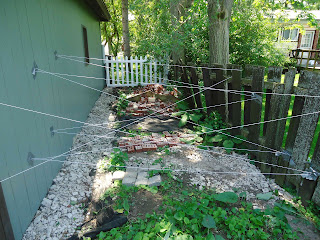 But, gasp! They still had to get through a laser maze to reach the bomb which was hooked up to the nuclear material (green jello). 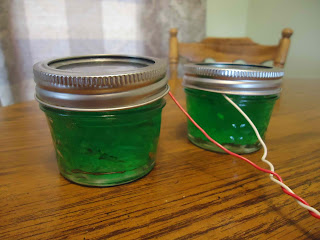 So they followed the clues from the pipe code to figure out that they needed to cut the black wire. 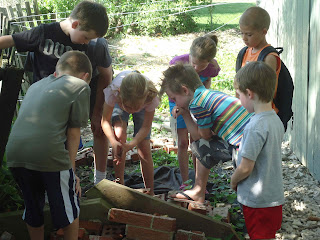 It was hilarious how stressed they were watching the lights count down. Clearly they were in to the make-believe. After they successfully diffused the bomb, they got the congratulatory message from the DVD and they "flew" back to headquarters.

Matt had taken away the training supplies and set the table for cake and ice cream during the mission. The cake was a old-school round bomb with a curly candle for the wick. 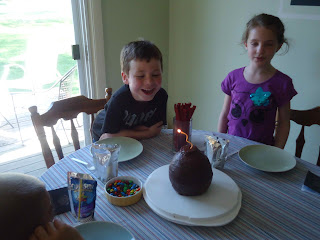 We also set out Twizzlers since they kind of look like wicks and M&Ms just for fun color. And that was all we did for food. Our party was late afternoon so I figured we were already spoiling their dinners; we did not need to push it. :) 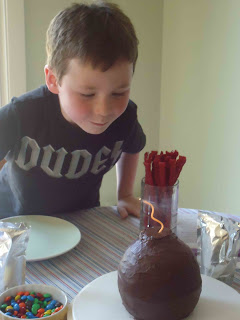 It was a really fun day. They were thrilled that I sent them home with their water guns and passports. Were we doing this again, we'd simplify it a bit or plan for a three hour party instead of two. We came down to the wire with the timing.


This post may be linked at the following parties (for their Blog Buttons see my Link Love page): (M) C.R.A.F.T., Amaze Me Monday, Sumo's Sweet Stuff,  (T) A Little Birdie Told Me  Stories of A to Z, The Blackberry Vine, How To's Day , Type A, Amaze Me August, , Show Me What Ya Got,  (W) Wow Me,  Blue Cricket Design, What I Whipped Up, Wicked Awesome Wednesday, Sweet Peas & Bumblebees (TH) The ArtsyGirl Connection,  Creative Juice, Thrifty 101 , Smilemonsters , Everything But the Kitchen Sink, Shabby Chic Cottage, Thrifty Thursdays, House of Hepworth's,  (F) Fingerprints on the Fridge, Furniture Feature Friday,  Lovely Crafty Weekend , Remodelaholic, For the Kids Fridays, , Craft Goodies, (Sat) Tatertots and Jello , Anything Goes , Funky Junk Interiors (Sun) Creative Blog & Hop, Sundae Scoop, Under the Table and Dreaming

Posted by Jen @ Domesticated Nomad at 8:55 AM